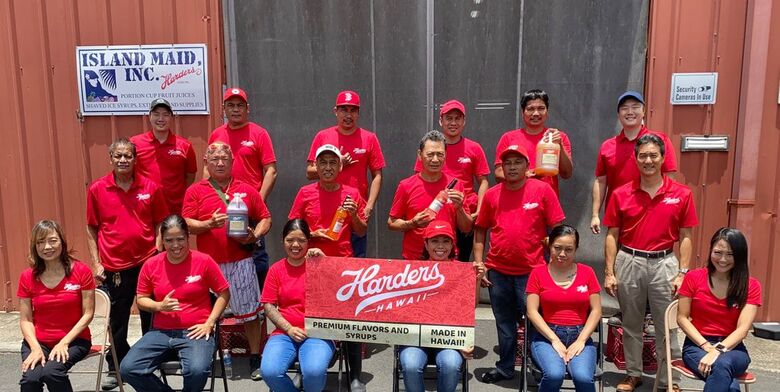 Island Maid, Inc. is a locally-owned family operated company established in August 1981 by Benjamin Tsunoda (Pres.) and Lilian Tsunoda (Vice Pres.) at its original warehouse located in Kakaako. The company was born out of recognition of a need for locally made in-flight juices. The company started by fulfilling the immediate needs of Mid-Pacific Airlines, Pan American Airlines, and United Airlines and later expanding and securing additional airline and hospital accounts. The growth prompted the company to move from the small warehouse and relocate in 1984 to a much larger facility in the Airport Industrial area on Koapaka Street.
​
Benjamin Tsunoda, the founding president, built a company with solid family ties, where all who worked in the business were one large family. He built a legacy that smoothly transited even after his death in 1998. Our founding father’s philosophy was that no account was too little nor too large to service and each and every account should be treated as part of our ohana.
Island Maid, Inc. is the establishment of his lifelong dream of succeeding in his own business. The fact that the company is strong and growing to even bigger heights is testimony of that dream of providing vital products and services to other local businesses.
In August 2008, Island Maid, Inc. saw developments that signaled company growth heights and bright future prospects. These were acquisition of the "Harders" brand of syrups as well as a much larger facility in Waipahu. Island Maid has chosen to stay true to the original Harders Syrup recipes, which were established in 1933, using only 100% natural cane sugar and premium ingredients. Along with the addition of the Harders line of syrups, we have also added shaved ice supplies and paper and plastic disposable products. Island Maid, Inc. currently supplies most of the major local shaved ice businesses as well as drive-ins and restaurants. On the portioned cup juice end, we supply most major airlines, hospitals, and schools.
​
It was also in the same year, 2008, that the company witnessed a generational change, this was with the joining of Tina Tsunoda, daughter of Benjamin and Lilian. Tina has been a great asset to the company, a graduate from UCLA, currently as Vice President. She has introduced many new and innovative ideas into the company and has also developed several new flavors for the Harders line of syrups. The future is looking even brighter for Island Maid Inc., in 2014; the Island Maid Company grew larger with the entry of Kevin Tsunoda and Lance Tsunoda. The brothers, whose energy and creativity have added to an already high flying family company, are both graduates from University of Hawaii at Manoa. Since joining, the two brothers have help spark new and innovative products.
​
Island Maid, Inc. envisions further growth in the food and beverage industry and is proud to be a minority-owned, locally-grown company.  The company is looking forward to advancing its operations and is committed to ensuring that the family heritage of serving its customers with Aloha continues. ​